What worked and what didn't.

My journey with carpal tunnel

About 5 years ago, I went through a time when I doubted I could continue programming.

I had carpel tunnel syndrome. A repetitive strain injury where the tendon going over the wrist at the base of your hand compresses the median nerve.

This compression causes your hands to feel numb, aching in the forearm and the inability to move your fingers without stabs of pain reminding you of your injury.

Carpal tunnel is the injury of the internet age. With many of us hunched over our screens and using them for everything (work, banking, socializing and entertaining etc), RSI is a natural consequence.

Many programmers have written about their experiences. I wanted to share mine. Cutting through the noise and presenting, what I believe to be, reality.

First, to give you a context of my overall health, I was 17-18 at the time, reasonably thin but not someone who frequented a gym.

When I first noticed pain in my forearm and tingling in my fingers, I did what all good internet children do - Google it. I stumbled across many different articles discussing tennis elbow, repetitive strain injury and carpal tunnel syndrome. Based on my own symptoms, I believed I had CTS.

Foolishly, I had ignored the pain for the longest time. Choosing instead to block it out, favouring writing endless code to maximise my learning and playing Starcraft until the early hours.

By the time I decided to do anything about it, it was already too late.

My wrists ached with a pain I couldn’t get rid of. And the underside of my forearm had filled with fluid to protect the area (aren’t bodies clever?).

I quickly searched YouTube for stretches I could do - including my favourite by “Dr Levi”. Although these exercises gave me some relief, it was temporary. I soon turned to painkillers desperate to rid myself of the pain.

Lesson: Don’t ignore your body. I could have managed the pain a lot better had I done things earlier.

Getting diagnosed was easily the most annoying part of the experience. When you go to a doctor (on the NHS), the first thing they have to do is refer you to physiotherapy. One of the many failings of the British healthcare system is it’s based on flow charts. It standardizes care but doesn’t fairly give a patient autonomy to skip stages that will likely be a waste of time and money.

The first lot of treatment was 5 sessions of physiotherapy. I tried to be as open-minded as possible but knew deep down that it wasn’t going to give any lasting benefits.

I was given a large rubber band to pull on for resistance training. Tennis balls for rolling out the affected area. And the same stretches I had been doing from YouTube.

I got the impression that many of the doctors I met weren’t well equipped to deal with someone of my age and fitness. Carpal tunnel usually affects pregnant women and the elderly.

After all of this, my initial impression had been correct. It gave me some benefit, but nothing lasting.

It wasn’t all in vain, however. One particular doctor did figure out that I had the median nerve trapped in both my wrist and back (near my shoulder blade). This gave me a formal diagnosis of carpal tunnel syndrome.

Lesson: Try to keep an open mind to people even if you think they can’t solve the problem at hand.

During the time I was getting physio, my mum had been going to an osteopath to help with her back. She recommended that I go and visit him and see what he could do. I’m skeptical of alternative medicines but had seen the impact he had on my mum so I decided to give it a go.

A single session was £50 for 30 minutes. That’s a lot of money for me even today. But back then it felt like a huge chunk of my wage was being spent on these sessions. Nonetheless, I was willing to pay for just some relief and the glimmer of hope that it would work long-term.

Despite numerous different techniques, nothing worked. However, after massage (not just the affected area), I did come out feeling incredible and was able to put away my painkillers for at least 2 days.

After deciding osteopath treatments were a waste of time and physio had yielded no results, I decided to push my doctor to get me seen by someone else.

Thankfully my GP referred me right away to a “hand specialist”.

The result of this cocktail of pills was that my work became extremely difficult to do. I became aware of a lack of focus and tiredness. Almost as if I was slightly tipsy and hadn’t slept the night before. Initially, I had to time the drug carefully. If I took it too soon before or after eating, I felt like vomiting. And if I took 2 pills (the recommended dose) at the same time, I felt like my brain wanted to float out of my skull. Eventually, I figured out that I could take 1 tablet, wash it down with a coffee and then take another 20 minutes later. This would have minimal effects on my focus and not make me high, whilst also giving me pain relief for the day.

Around this time, I came home one day to my mum pointing out that my skin had started to discolour. My livers protest at having to deal with the painkillers.

She prescribed a mountain of spinach and other iron-rich foods, which helped alleviate this.

But the message was clear, I needed surgery.

When I saw the hand specialist, they immediately put me on the list for surgery. That was the good news. The bad news was that I’d need to wait 4 months. But, he did offer that he had availability next Tuesday at his private clinic. I forget how much the operation would have cost, my family and I were unwilling to pay. I could wait it out.

Whilst I waiting for D-Day, I tried a laundry list of treatments that many with RSI recommend. With mixed results.

When the day came for the surgery, I felt relief but also a little anxiety. I had never had surgery before. I was unsure of the “setup” you know. In movies where people are having bullets removed and organs transplanted, we are familiar with the look of an oval operating theatre with dozens of doctors milling about.

But my operation was different. I even, sort of, knew how to do it.

Dr. Youtube had provided me with a real-life glimpse into what my procedure would look like. It involved slicing the tendon that goes over the carpal tunnel. Simple as that. When it heals, you pray that it doesn’t compress the nerve again.

The surgeon himself was very friendly. There was soft classical music humming in the background and tubed lighting flickering above me. It was a small rectangle room with the operating table in the middle, two swivel stools at opposite corners and an ancient windows XP tower whirring in one corner.

A sort of screen that resembled a thick paper towel was erected to obscure my view from the operation that was taking place.

After the surgeon ran through his checklist, confirming the operation I was having and my details, it started. First, I was injected with a local anaesthetic near the incision site. And then the surgery was underway. Due to the numbness, it felt like knives scrapping at a brick. It felt odd. The pressure was familiar, but the lack of pain was something my brain couldn’t quite fathom.

In about 15 minutes, the surgery was done.

I was helped to sit up and the doctor started asking me questions. About 30 seconds after, I passed out. It was the first time I’d passed out (and I hope last). I saw what resembled a wormhole. With walls of a metallic jelly herding me towards the infinite centre. I tumbled down. And then suddenly woke up, in a different room with my, then, girlfriend at my side. She asked how I was doing as I came round, bleary-eyed as if after a long night’s sleep.

The nurse assured me this was quite common but I felt quite weak having fainted at such a minor operation. I hadn’t seen the blood or the wound. I just passed out as the blood rushed back to my head.

Day by day, my hand recovered. I gained mobility back in around a few days but my hand was stiff from the stitches for a couple of weeks until they were removed.

After 2 weeks, I returned to work. My hand was quite stiff and the stitches itched but my pain was gone!

The fluid that had built up around my forearm still remained so I was a bit concerned it hadn’t worked completely. But about a month afterwards, it was clear that the procedure had worked. But the fluid was not going to go away.

After all these treatments, this is how my hand now looks. 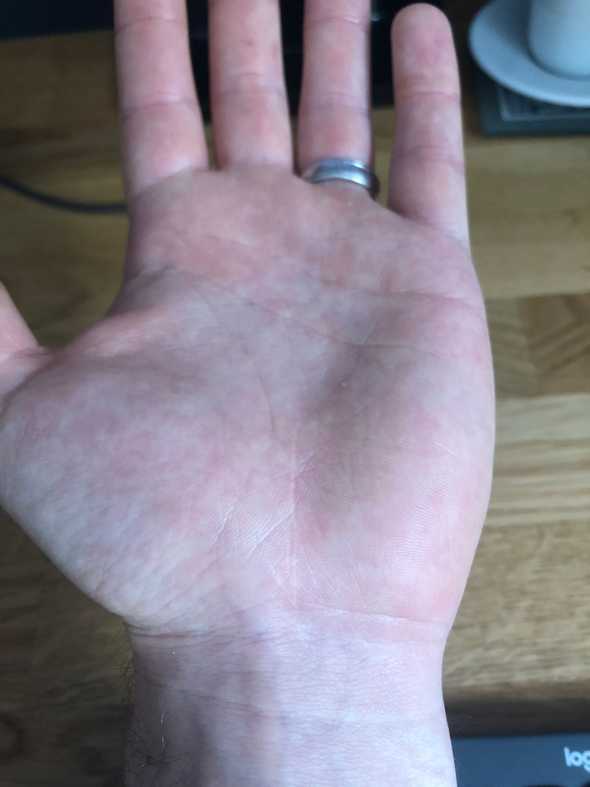 You can see the small scar just above the ridge of the wrist where the incision was.

Overall, surgery was the best thing I could have done. My only regret is not acting sooner. Here are my main takeaways:

If you have any questions about surgery or anything else then hit me up on twitter.