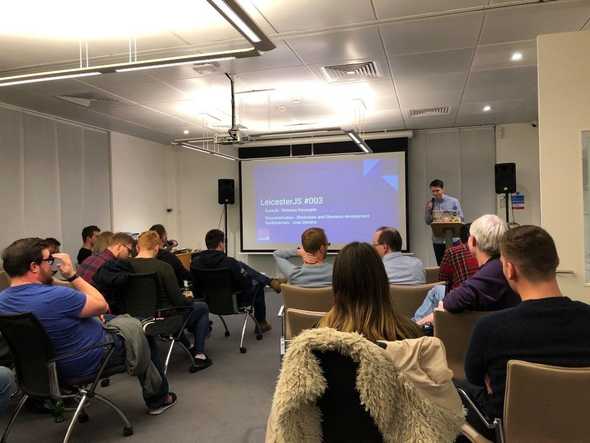 A picture taken from the November 2018 LeicesterJS meetup

LeicesterJS is born out of the rise of Javascript now being the de facto programming language for a majority of developers. Additionally, we aimed to bring together a tech community in Leicester.

I have been running LeicesterJS now for over 4 months and this is just the start. Before the first meetup, I was very nervous about getting everything together and although it went off without any dramatic hitches, I have learned a great deal and continue to do so with each and every event. Here is some of the advice I wish I had before planning my first meetup.

Start with the essentials

The barebones requirements from a meetup is a venue and catering. For LeicesterJS, I was able to partner with my current workplace to host the event and foot the bill for the food and drinks provided. In exchange, we give them a plug at the start of each event and they receive exposure to potential hires. Often meetups will be arranged in this manner as it makes organizing the event a lot easier, since you, the organizer, are at the venue ready to prepare anything that is required. If you are looking to arrange your own meetup, kill two birds with one stone and look to see if your employer wants to help.

Next up is the speakers, for this, I turned to developers in my team and asked around if anyone wanted to give a talk. You can also reach out on twitter or to other developers you know in the area. Worst comes to the worst, do the talk yourself!

And with that, we had a meetup! Except for one key thing…

You want your meetup to be a success and part of that success can be measured by the attendance rate. Here is how I approached building a community of people from the ground up

After the first meetup, I had a number of people come and ask me for the slides to the talks that had been given. I hadn’t even thought about that! There were a number of these sorts of things that I had to get a process nailed down for.

After getting through the above, it can seem as if there is nothing more to do — just grow the meetup right? I fell into the same trap too. But a further refinement came first by introducing a code of conduct. In this document, it outlines how not only speakers, but all those in attendance, should behave and having clear processes for people who do not. It’s worth grabbing a document that has already been written because in all likelihood you are not a lawyer (but if you are, fill your boots!). Additionally, it’s good to have a point of contact (an email address and a person named) who should be contacted if someone wants to report something. Although you hope that something like that will never happen, there has been far too many cases in the tech industry alone that have highlighted that problems with intolerance or any sort of bad behaviour towards others is unfortunately not uncommon — often it goes unreported, I hope that never happens at LeicesterJS. Nonetheless, it’s essential to have.

Additionally, you can offer yourself as a resource if any potential speakers need help preparing a talk. Since its beginning, I’ve encouraged first-time speakers to give talks. This can be a nerve-racking experience so give generously to offer support with slides, talk topics etc. The meetup group slack channel can be a great place to do this.

A lesson I learned early on was to encourage audience participation. It makes the meetup more active and motivates people to discuss afterward as well. Perhaps recommend that your speakers open the floor so to speak with a discussion. Asking if anyone uses the technology being discussed, or ask them if they use an alternative.

Starting your own tech meetup is an incredibly rewarding pursuit, but don’t underestimate its work. It’s also worth noting that, if you are in a smaller city as I am, it is better to support any existing meetups than to create your own. Ask the organizers if you can assist in any way, perhaps arranging new speakers or handling promotion of the event, they would welcome anyone to lend a hand.

If you are in the Leicester area, come along to LeicesterJS — the meetup is every 3rd Thursday of the month!